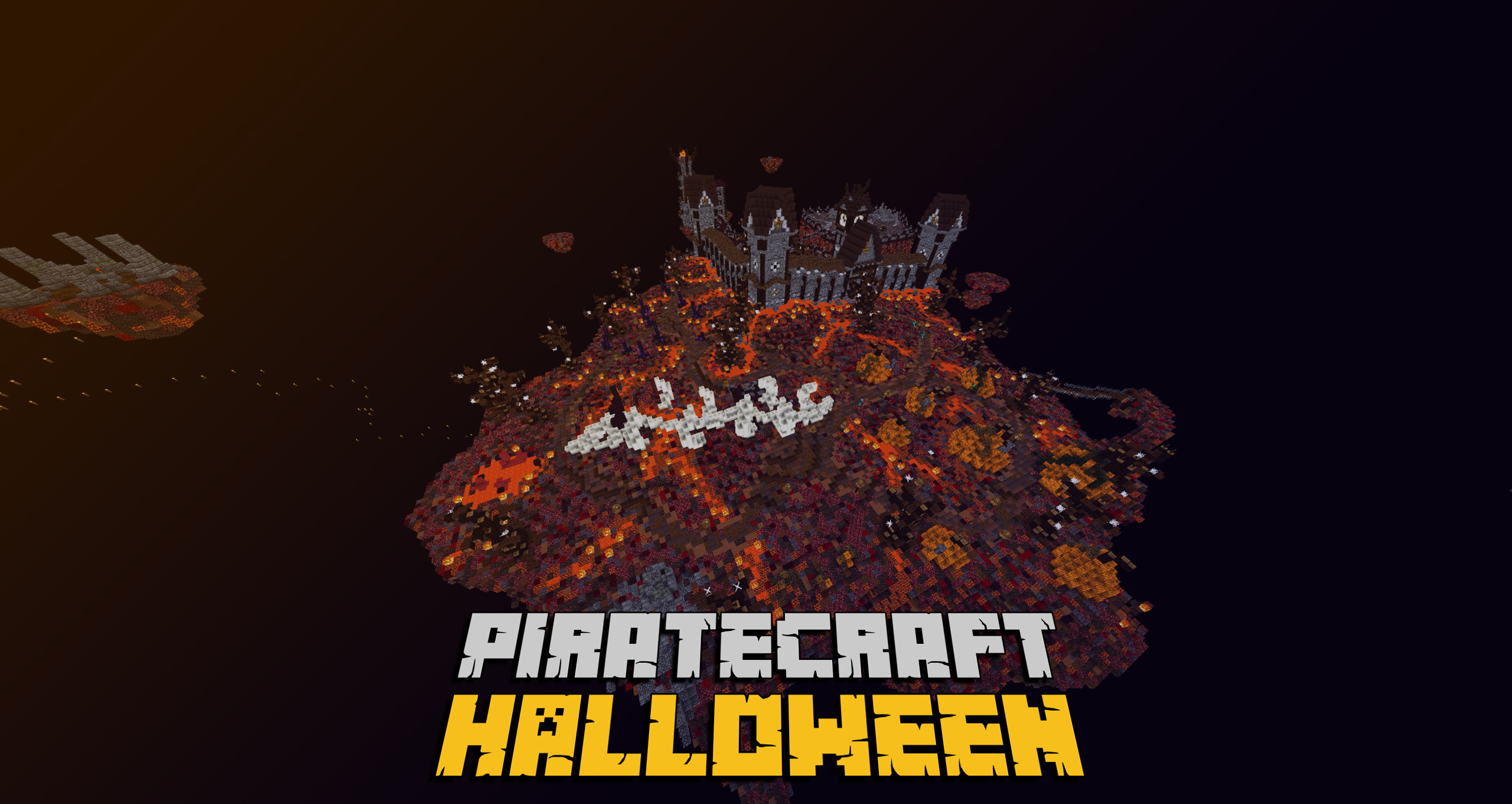 Welcome to this years “Better late than never” Halloween event! Here at PirateCraft Halloween is the staffs favourite holiday, so we go all out on the event, this year has taken a different direction! In the past we used to host the event on the main survival server, where you would come in with your own Gear, and the Mobs would drop items you could take home. This caused a lot of stress when you died as you would loose your top-tier-gear to spooky demons! Not this year! I have spent the last few weeks preparing for cross-server madness allowing me to run Events on their own events server for complete

Get to it scallywag! How do I play!?

Right now were in an alpha stage, so its not really advertised, use /server events from the main survival server and that will get you to the Halloween Event! Once were a bit more happy with the stability of the we will add in portals, a /play command to all servers to navigate and each server will have its own IP for quickly getting to it (Without having to log into the main survival!) As well as our soon-to-open Hub, which will have NPC’s that are clickable and a /hub to get to it. Right now the only way is via /server events, and to get back /server survival. I will change this paragraph of text once the changes are made.

I live streamed the night we opened up the Halloween event, the Halloween event starts at 1 hour on the dot if you want to skip forwards, the first hour is A giant Crew battle on the survival server, followed by a large loot drop for custom heads and custom named Elytra! This will only be up for the next 13 days until Twitch auto-deletes it, I need to start recoding locally too! (I also need to watch what songs I play, half of it is muted due to copyright! God dammit twitch!)

Watch video from GodsDead on www.twitch.tv

This is our first mini-games, The plugin is brand new, We haven’t had many games for testing, there will be bugs, I would class the event as still in Alpha, we are collecting feedback on the forums, I have made a list of things that already need changing at the top of the thread so you know what will change so you don’t repeat what’s already been reported!

As usual we are running a month-long 15% off sale to celebrate Halloween! use coupon code spookysails for 15% off /donate and the Donation store when you checkout.

CallieMav updated the Custom mobs from last years Halloween event, so we could re-use them in a mini-game arena! how awesome is that! This time you can battle the PirateCraft Halloween mobs with pre-made kits without worrying about dying!

Each of the custom mobs drops more XP, the harder the mob the more XP! At present here is the breakdown of how XP is calculated per mob on the Halloween Mob VS Players Mini-game.

You can check out all the mobs from last years event, and this years mini-games on our old blog post.

Most of the buildings and trees are destructible, they react to explosion damage from Mobs, TNT, Explosion Bow etc. You can blow holes in/around the walls and buildings to escape or break in.

There are 3 classes, demolition, Medic and Assault. Each class has 3 upgrade tiers, accessed from /arena rewards. You buy upgrades using nuggets, which are awarded for playing and killing mobs for XP.

As from above you gain XP from killing mobs, harder mobs drop more XP, at the end of the round your XP is converted into Nuggets, a currency that can be spent.

Nuggets can be spent on the Halloween Classes to upgrade your tiers on your classes, it will in the near future be able to be spent on the survival for special Halloween custom items! There is no ETA for this yet, as the mini-game is still in alpha and we are changing and fixing bugs.

Mob spawns are broken up into phases, Each phase spawns a new set of mobs making it harder! In phase 5 the Main Bosses spawn, these drop the most XP. PVP Is turned on in phase 4, to introduce more of a battle into the gameplay! Each game lasts 7 minutes.

Massive props goes out to the Builders of the Halloween event, who were able to crack out this arena in an incredible time of 3-4 days. The Original structure and layout of the build came from JusaPlayer1’s survival build on the main server! He inspired the build team to make his spooky build into an arena for this event!

Using JusaPlayer1’s build as a template, the build team set in to expand it into an arena, massive praise goes out to Maximus_Terragon, Gruusha (Jmoo), Riverwood202, Cysteen, The_Network, Dpex81, & SmokeyRiver for building the custom terrain, re-shaping the build, adding in new areas, adding hidden areas, underground boss spawns and all the cool spooky details (Those spooky ducks).

Massive Credit to CallieMav for once again giving us the unique fighting experiences from the custom PirateCraft Halloween mobs! He spent a lot of time updating them to work with all the updates! So Thank you CallieMav!

Thank you to all the testers and everyone that helped me get this out! It was a giant learning curve for me to host a mini-game on its own server and sync everything between the servers, this is only the beginning and I’ve figured out all the hard work 🙂

You must be logged in to reply to this topic.